In the new build we have a lot of interesting and useful updates. First, this is the end of Agatha’s quest line. Those who have coped with all her quirks will be able to go through a large and beautiful scene, and find out how it will all end. The event will begin our hero himself, while traveling around the city. He will offer to call Agatha, but since the telephone contacts are now in reconstruction state, you can immediately go to the event.

In addition to Agatha, one of the old scenes on the beach, with two pretty girls, received an update. Its code has been completely rewritten, the action order has been updated and the scene load has been accelerated.

Thanks to the renewal of old scenes, it became possible to skip sex scenes, for those who play not the first time. Gradually, all such scenes will receive an additional button that takes you to the end of the event. But it will only work if you have previously seen this event. (I repeat once again that for now this does not affect all the scenes, but their list will increase little by little.) 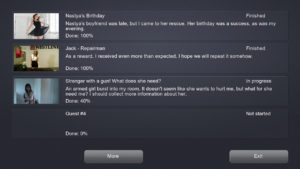 Another novelty is the Quests List. A new mechanism was added several builds back, and now it will fill it with each build. In this update quests from the first and second chapters, as well as the quest with Agatha were added to List. Some quests received an updated code to display correctly in the List.

You can call up a Quests List by entering the character window, or by pressing the Q button on the keyboard. The List will be quite detailed, and will be able to show all the quests you have collected earlier, at what stage you stopped, what to do next and how many steps are left until the end of the task. When I add support for all the quests, they will automatically appear in your list, and you can find out what you missed.

Translations into Italian, Korean, Dutch and Polish have been updated. Thanks to everyone who helps in this not easy task.

Also, corrections were made to the action buttons on the 7th day, the game UI was slightly updated, and rare crashes were fixed.

This game is multilingual: RU/EN/DE/FR/IT/ES/PL/GR/RO/TR/UA/CN/KR/AR. If you want to help make translations or edit the text, click here.

If you like this game, support its development, join our club and receive additional rewards 🙂